As we head into another week of what is the now the longest Government Shutdown in U.S. History, the news cycle may begin to feel repetitive and depressing. In fact, maybe it already felt that way two weeks ago.

An easy solution is to turn off the TV, pretend it won’t affect your life, and go about your business. Before you do, I implore you to consider: do you have friends or family members that are currently left without knowing when their next paycheck will come? Will you be able to file for a tax refund this year, or have access to other government services you rely on? Will you feel safe living in this country without a functioning government? Or perhaps without a $5.7 billion border wall? Is there really no way in which this admittedly, frustrating, politically motivated standoff will affect you or anyone you love?

One of the appeals that both Democrats and Republicans have been making is to our morality and sense of justice as Americans. Both sides share stories meant to tug at our heartstrings. Furloughed workers who have to choose between paying the rent or feeding their families. Victims of violent crimes perpetuated by undocumented immigrants. And they are both correct. There are people hurting on every side of this fight. Not to mention the migrants themselves, who are just chasing the American opportunities that those of us who are citizens often take for granted. Like a democratic government that will not allow any one person or party to dictate policy without checks and balances.

Another tactic that people often employ when frustrated by politicians re-hashing the same arguments over and over is to flee to the comfort of like-minded folks who “get it.” There is no denying the appeal of this. Watching celebrities, comedians, TV and radio personalities tear down the people you disagree with – pointing out their stupidity, and making fun of their slip-ups – can be a relief when it seems like there’s no way forward. Hopelessness and despair momentarily cured by laughter or a well timed zinger.

The danger of this approach is becoming so entrenched in a group of like-minded people that you forget the rest of the country is doing the same. As your Twitter and Facebook feeds fill with Late Show and @AOC posts, somewhere else someone’s feed is a steady stream of Ann Coulter and @realDonaldTrump. Or vis versa. The news sites you reflexively open are similarly unlikely to have more than one viewpoint represented.

All news is biased. All people are biased.

We all have our unique stories, that are naturally shaped by the people around us. That’s not going to change anytime soon. However, there are a few things that we can do to ensure that we don’t get so deeply entrenched in our own viewpoint, our own stories, that we forget to hear others.

We can become conscientious consumers of more stories by reading AllSides of the news. We can follow bills being brought forth in Congress and weigh in on issues directly, instead of waiting to hear about them in a pre-packaged message from one party or the other. We can make the effort to find nonpartisan, fact-based explanations of topics in the news, like this helpful article about the history and effectiveness of border walls. We can follow people that we wouldn’t normally agree with on social media, because as much as we might want to shut them out and pretend they don’t exist, they do. Whether it’s the family of immigrants down the street that you don’t trust because they are still learning English, or the family of right-wing conservatives who you fear because they own guns. They exist. They are patriotic Americas just like you. And they are here to stay.

So hear them out. 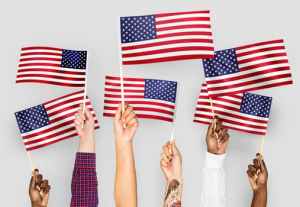